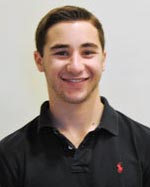 Connor James (II) runs far and fast. Coming to Milton in Class II, Connor is making huge contributions to the School’s running programs. Earlier this month, he placed eighth in the nation in the 3000 meters and 14th in the 1500 meters at the U.S. Track and Field Association’s National Youth Championship in Maryland. It was his first indoor championship experience.

“Being in an atmosphere where everyone is sharing the same competitive experience was a lot of fun,” says Connor. “I was happy with my performances. The 1500 was a fast race, with 20 kids crowded on the track. I’ve never run an indoor race in such a large group before. I had cuts all over my legs from everyone else’s spikes!”

Connor trained for the competition with other Independent School League (ISL) runners, competing in open high school meets. In the fall, he ran cross-country for Milton and made his mark early in the season.

“Last spring, Milton graduated its strongest and deepest distance running squad in recent memory,” says Coach Scott Bosworth. “Connor arrived at an ideal time, along with David Mercier (II), to help fill the void. Connor immediately showed that he was a force to reckon with among the ISL’s elite runners. He started the season with a win at the Martha’s Vineyard High School Invitational and finished with a strong fourth place finish at the ISL Championship. His leadership in competition and among his peers led to his being elected captain of the 2014 team.”

Connor was a lacrosse player and only began running as a way to stay conditioned. He soon discovered a love of racing’s competitiveness. He is excited for the spring track season, and his goals are to do well in the ISL and New England championships.