Sabbath Loaf and Transit Stop Passers By Alongside Straus 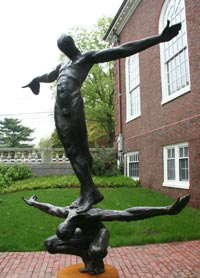 New sculptures that have surprised and intrigued everyone on campus are the works of sculptors from the Class of 1966. Sabbath Loaf, by Murray “Mac” Dewart ’66 and Transit, by Walter Horak ’66 help commemorate Mac’s and Walter’s 45th Reunion this year. You can see both pieces in the green space between Wigg and Straus, just off the pathway, through the end of June.

Mac Dewart’s work is represented in several permanent collections, including the Museum of Fine Arts, Boston, the DeCordova, and the Rose Art Museum. His work is also represented at several colleges and universities, including Hamilton College, Harvard University, Saint Anselm College and Smith College. After Milton, Mac graduated from Harvard University and the Massachusetts College of Art. He is a co-founder of the Boston Sculptors Gallery.www.dewartsculpture.com

Walter has exhibited throughout the U.S., and has received numerous awards for his art. His work is represented at several galleries across the country, and Walter has included teaching in his sculpting career, including at The Charles River School, Mass College of Art, Storm King School and Milton Academy. After Milton, Walter graduated Harvard University, Rhode Island School of Design and University of Massachusetts, Dartmouth. www.walterhorak.com

Milton has welcomed the opportunity to show their art in the past, and both men are pleased to share, once again, their vision and expression with faculty, staff and students.