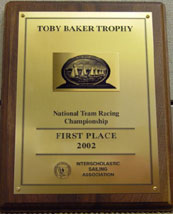 The team sailed in 420s on Lake St. Clair, against 12 teams from around the country in the two-day competition. It wasn’t all smooth sailing for the Milton team. Faced with windy, wavy and rainy conditions on Saturday, the Milton team worked hard to finish Saturday’s in second place behind Tabor Academy and advance to the double round-robin tournament on Sunday against Tabor, Newport Harbor High School (CA) and Jesuit High School (LA).

The final four teams raced a double round-robin on Sunday and carried their first round scores forward. Sunday’s weather was much improved, and the Milton team finished the first round robin undefeated before suffering two disappointing losses to Newport and Jesuit in the second round. The team was able to remain positive and in the last race of the day, beat Tabor. The competition ended in a 13-4 tie with Tabor, but Milton was awarded the championship after beating the Tabor Seawolves 2-1 in head-to-head sailing.