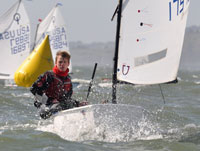 Over winter break, Russell Clarida (IV) traveled to the east coast of New Zealand for the Optimist World Championships, where he competed against over 200 sailors from around the world. An Optimist is an eight-foot, single-handed sailing dinghy intended for use by sailors ages 15 and under.

Russell arrived two weeks before the competition to acclimate himself to the conditions of the South Pacific Ocean. He and four other sailors comprised the United States national team, representing the top American sailors of their age group. Russell is the 2011 North American Champion, a title he claimed over the summer in California.

Racing days at the Worlds are intense; the sailors compete in three races every day, crowding at the start and then racing out and around the markers before heading to the finish. Each race lasts about an hour and 15 minutes.

“The racing was tough,” says Russell. “The sun was really strong and the wind came from a different direction every day.” Despite the challenging conditions, Russell placed 27th out of 210 sailors.

Russell does not come from a family of sailors. A local community program near his home in Connecticut sparked his interest when he was nine years old. By age 12 he was practicing on Saturdays and Sundays, year round. During the school year, he does his homework on Friday nights to keep his weekends open for sailing.

“I love the independence of the sport,” says Russell. “You have to be able to motivate yourself. If I work and practice really hard, I know I can do well. Every day that I go out, it’s a new game. The water and wind are always changing. I never get tired of sailing.”

Russell is looking forward to racing on Milton’s co-ed sailing team this spring, where the events are team competitions. In individual competition outside of school, Russell will be moving to a new class of boat, the 420, the next level of youth development boats for ages 15 to 19.