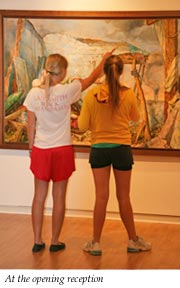 Illuminations, an exhibit of the art of Samuel Bak created for Facing History and Ourselves, will open at Milton’s Nesto Gallery on Tuesday, September 14 and will continue through October 23. Samuel Bak has created hundreds of paintings over his long life; they are evocative, disturbing, and inspiring. Born in 1933 in Vilna, Poland (now Vilnius, Lithuania), Samuel Bak was recognized very early in his life as an artist. He had his first exhibition at nine years old, inside the Vilna ghetto, as atrocities of the holocaust grew daily. Samuel and his mother were ultimately the only survivors of his extensive family, at the end of World War II. Bak’s paintings recall the memories of what was lost—childhood, faith in the goodness of man, and the identity of a people. Life does return after trauma and devastation, however and Bak’s paintings are surprisingly joyful and colorful. They celebrate life, but do so by presenting many psychological puzzles that the viewer is invited to solve. His enigmatic figures, fractured landscapes, and mythical and religious motifs challenge us to defend our humanity, and to embrace the stories that define us.

Sameul Bak’s prolific work stands starkly apart from current trends; it transcends the topical, the sensationalistic, and the conceptual. His work fuses numerous elements: the color and psychological energy of Michaelangelo’s Sistine Chapel; the cryptic metaphors and moods of Rene Magritte; and the folk energy and stories of Thomas Hart Benton. Bak’s integrated vision grows stronger with each of his years. His art reveals him to be a true master of exploring identity. This identity is both personal and collective.

According to the Pucker Gallery, where many of his works are on permanent display, Samuel Bak “spent his life dealing with the artistic expression of the destruction and dehumanization which make up his childhood memories. He speaks about what are deemed to be the unspeakable atrocities of the Holocaust, though he has hesitated to limit the boundaries of his art to the post-Holocaust genre. He created a visual language to remind the world of its most desperate moments.”

Pucker Gallery created the Illuminations collection for Facing History and Ourselves. It is intended to be a traveling exhibition for educational and other institutions. Insightful commentary by Lawrence Langer accompanies the paintings. The show at the Nesto Gallery also includes five larger works by Bak. The organizers hope that this powerful show will attract many students of the human condition.

The Nesto Gallery is located in the lower level of the Old Science Building. For more information, contact Gordon Chase, chair of visual arts department, atgordon_chase@milton.edu or 617 898-2139.