Sarah Sze Creates “The Edge of One of Many Circles” 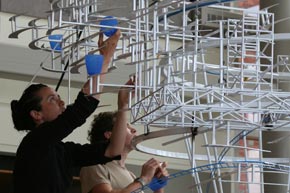 What looks fragile, whimsical, spun of thread, filled with light—and at the same time is shaped of steel, designed to hold—balanced in the air, several stories high—more than 800 pounds of visual intricacy?

What is complex, multidimensional, chock full of shapes, colors and objects and ideas, and at the same time affirms the grace, simplicity and openness of an extraordinary building?

Sarah Sze’s work, “The Edge of One of Many Circles” in the Schwarz Student Center bonds sculpture and architecture to yield an extraordinary artistic experience. The experience is new each day, because her piece beckons you in from different starting points and draws you toward the center along different routes.

Sarah Sze, Milton Academy Class of 1987, has created installations and permanent sculptures in august museums and cultural landmarks all over the United States and the world, including Paris, London, Milan, Leipzig, Kanazawa (Japan), New York, Chicago, San Francisco, Boston, San Diego and Seattle. After completing the sculpture at Milton this summer, Sarah headed to California, where she has been commissioned to build a piece in a new building at the University of California at Berkeley. Milton students, parents and alumni can now experience her work in the Schwarz Student Center because of the generosity of Lisa and Richard Perry ’73, member of the board of trustees who commissioned Sarah as a gift to the School.

I begin by “coming to the site, seeing the nature of the building, who uses it, how they use it, how the space works,” Sarah says. “The Student Center is about flow. You move from a low, dark, entrance to an immense openness. I wanted to emphasize the drawing in. When you enter the building you see a part of the sculpture and then as you come in it opens up to a full structure — in the part of the building that is all about light and openness. I wanted the sculpture to come cascading down from the highest corner, and hover over a broken plain (the Student Center staircase being the ‘cut in the flat plain’). You can view the piece from all around it. It’s like the piece at the San Francisco MOMA (Museum of Modern Art) in that respect: You can see it from above, from directly below and from all sorts of angles. People will live with the piece—rediscover it all the time. During the day it’s backlit and has a skeletal quality. At night, looking from the outside, it’s lit up. So it has a day life and a night life.”

Ladders and tresses disguise the steel cables that hold the sculpture from the ceiling struts, so the work seems suspended in air. “It doesn’t look like a marionette,” Sarah says, “I wanted a piece where the structural and the aesthetic are confusing: you don’t know where one stops and the other begins. The piece is about building, and you can recognize elements about building—bridges, towers, levels, building tools. As you look, the idea of fragile delicacy is sustained, but it’s pushed to the limit by the strength implied in the building elements. Experientially, I want people to be lost (in exploring), and then find a recognizable moment, like the stairs. Those moments draw you in, like the first line or last line of a novel.

“The piece seems alive. It imitates something that is moving, growing. All the things included are gestural: For example the blue cups are spinning up, and spinning down. The work looks at ‘behavior’ in objects. At the bottom, for instance, the circles gather like bees around trash. It’s as if the objects have some motivation.

“The white structure is all fabricated. I could have left it that way, I suppose, but to the fabricated things I added real objects. The piece is more complex because of the interplay of the two.

“The interplay between fabricated and real relates to that question: What is the line between real life and art? Why is this object valuable to us—because of its aesthetic importance or its practical value? The levels, for instance, are both decorative and practical. I want to blur the lines.

“In terms of sculptural properties, I’m interested in instability. When you’re doing art as your life’s work, your major ideas have to come from some personal space and from reflecting upon your time. In our time the onslaught of information and the speed of change create a sense of constant instability. We can be lulled into a sense of safety because of things like the progress in medicine, but then something we couldn’t be prepared to handle happens, reinforcing the lack of predictability or stability in our world.”