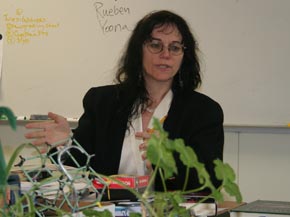 Cynthia Fox ’79, author of the recently published Cell of Cells: The Global Race to Capture and Control the Stem Cell, visited campus April 10 to speak with students in Linde Eyster’s biology classes. Cynthia has combined her talent for writing and her fascination with science, traveling the world talking with scientists, physicians and patients about their experience with stem cells and stem cell research. She explained to students, “Stem cells are an incredible medicine, because they know more than we do. But, because we are still in our early stages of fully understanding how they work, they also have the potential to be very dangerous.”

Cynthia chronicled her travels—which include Egypt, Israel, Japan, Singapore, Korea, China and the United States—and spoke of the various ways that embryonic and adult stem cells are being researched and utilized. Most widely, the clinical applications of stem cells today are in cancer and cardiovascular medicine, regenerative medicine and tissue engineering, and cosmetic plastic surgery. The “global race” Cynthia refers to in her book’s title comes in the rapid advancement that many countries are taking advantage of while the United States maintains a ban on federal funding of embryonic stem cell research. While the U.S. government provides substantive funding of adult stem cell research, the ethical implications surrounding embryonic stem cells restrict federal funding in that arena—something that Cynthia believes will be changing in the very near future.

In a Library Journal review of Cell of Cells, Mary Chitty writes, “The issues [surrounding stem cells] are as much political as scientific. The promise of stem cells may never be exactly as hoped for, but some patients are being helped in truly new ways… [Fox’s book] is a good introduction to a topic that isn’t going away and a gripping and accessible guide to the ongoing work [being done in the area of stem cell research.]”