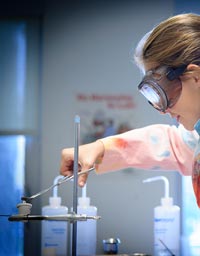 At the symposium, students presented posters and conducted demonstrations. For their DYO projects, students construct their own experiments based on, but not limited to, the material covered in class and their own personal interests in a specific area of study. The project is a long-term assignment, lasting for about a month, and is a chance for students to work independently of the curriculum without heavy guidance from a teacher. Most students perform their DYO with a partner, and the project requires time outside of class.

Mark Balboni (I) is taking Advanced Biology. Over the past few weeks, he worked with E. coli bacteria cultures and tested the effect of pH on the bacteria’s colony growth. Part of his experiment involved producing a lysogenic broth: a medium rich in nutrients ideal for bacteria growth. He injected each quantity of the medium with different amounts of citric acid, giving each treatment a wide range of pH values. He then placed a fixed amount of E. coli in each medium and observed their growth over time.

Amanda Jiao (I) is also taking Advanced Biology and worked with planarian flatworms. She tested the effect of temperature on the worms’ rate of regeneration. Amanda says, “planaria can regrow their entire body or head from a piece of tail tissue.” For her project, she cut off the heads of the flatworms “behind their ears because they have triangular shaped heads” and placed the tail tissue in environments of varying temperatures, ranging from 4 to 30 degrees Celsius. She then monitored the number of days it took for their head to regenerate, which she quantified by the amount of time it took for the eyes of the flatworm to become visible.

“The symposium is a really great chance for Milton science students to demonstrate what they’ve learned over their time at Milton,” Jesse Conway (I) explains, because “they have all worked really hard on their labs.” The symposium is also a valuable opportunity to see how Milton’s Science department curriculum and physical resources enable students to pursue their passions and convey their findings convincingly to the general public.