Scotty McLennan Is This Year’s Speaker for Religious Understanding 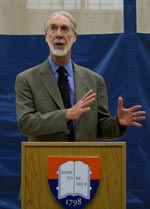 Reverend William L. McLennan, Jr., dean for religious life at Stanford University, provides spiritual, moral and ethical leadership for the university—teaching and encouraging a wide spectrum of religious traditions on campus. Scotty McLennan, as he’s better known, is minister of Stanford’s Memorial Church, creating opportunity for multi-faith worship, as well as raising and responding to social justice issues and engaging in public service. On Wednesday, October 6, Reverend McLennan talked with students as this year’s Class of 1952 Endowed Speaker for Religious Understanding.

Dean McLennan earned his bachelor’s degree from Yale University in 1970, and earned his master of divinity and J.D. degrees from Harvard Divinity and Law Schools in 1975. He is ordained to the Unitarian Universalist ministry and was the chaplain at Tufts University from 1984 to 2000. Reverend McLennan was a senior lecturer at Harvard Business School for ten of those years.

Admitted to the Massachusetts bar as an attorney, Dean McLennan practiced church-sponsored poverty law in the Dorchester area for many years, representing low-income individuals in the general practice of law, including consumer, landlord-tenant, government benefits, immigration, family and criminal law. In the early 1980s he developed and directed the Unitarian Universalist Legal Ministry, which employed non-adversarial means of dispute resolution, framed clients’ legal problems in the context of their entire life situation, and sought reconciliation with other parties.

Reverend McLennan is a recipient of the Rabbi Martin Katzenstein Award, the oldest award given to Harvard Divinity School alumni, “to honor, among its graduates, one who exhibits a passionate and helpful interest in the lives of other people.” He also was honored with Morehouse College’s Gandhi, King, Ikeda Award in 2004, which was “established to recognize leaders who promote peace and world reconciliation.”

At Stanford, Dean McLennan has taught undergraduate courses in ethics and urban studies, as well as courses in the continuing studies program and the Graduate School of Business. His primary research interest is the confluence of religion, ethics and the professions. Reverend McLennan has written and co-authored several books on these topics, including Finding Your Religion: When the Faith You Grew Up With Has Lost Its Meaning and Church on Sunday, Work on Monday: The Challenge of Fusing Christian Values With Business Life. He and his wife, Ellen, have two sons—both Milton graduates: Will, Class of 2000, and Dan, Class of 2002.