After a Season of Wins, Milton’s Robotics Team Takes on the World 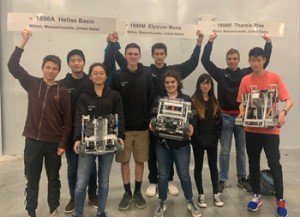 Milton’s competitors have approached each match with positive attitudes, realistic about their chances against seasoned teams with more time to practice and work on their robots, Alexander said. That mindset has helped make their wins even more special.

“I am looking forward to seeing a lot of really cool robots and meeting really cool teams at worlds, including friends we met at nationals and states,” he said. “The most fun part about competing at these high-caliber tournaments, for me, has been meeting a lot of teams like ours, who are there to have fun and are not completely focused on winning.”

The hectic and collaborative atmosphere at VEX competitions—competitors have to compete in intense matches as well as scout their opponents and the teams they pair with—has been easier to navigate because the team members work so well together, says Christy.

“I’m super proud of what Milton Robotics has accomplished over the last four years,” she says. “Every year, we’ve made significant improvement, but I never thought we would get the opportunity to compete at worlds. I can’t wait to see how big the robotics program will become in the future.”

Christy credits the team’s hard work with their success this year, as well as a renovated and expanded work space that was completed last summer, and the guidance of faculty members Chris Hales and Khizar Hussain. “They’ve also sacrificed much of their free time for Robotics, because they genuinely believe in us,” she says.

Competition in VEX Robotics is a three-season effort, says Chris. The 2018–2019 school year started with 20,000 robots overall, and students competed in various qualifying rounds to advance to next stages. At the nationals in Council Bluffs, Iowa, early in April, Milton’s three robots placed in the top 32, the top 16, and the top eight.

“It’s a huge deal,” for a team like Milton’s to be this competitive, says Chris. “We compete against teams who have robotics as part of the curriculum. Our team puts in the time after school and late into the night. They’re very talented, and they also work very hard. Compared to what we’ve done before, they’ve been very successful. They’ve proven to themselves that they can make it this far. Now their goal is to keep getting better.”