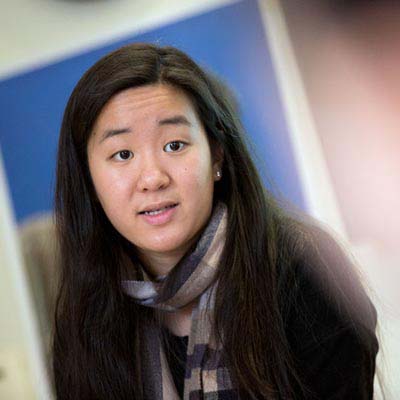 All history is global history, says Kimberly Cheng, this year’s Hong Kong Distinguished Speaker. Ms. Cheng presented an overview of her research on Jewish refugees living in China during World War II, explaining that a confluence of world events led 20,000 migrants to flee persecution in Europe.

As Hitler rose to power in the 1930s, Jewish people fleeing Germany faced immigration restrictions across the West, including the United States, in countries where propaganda and stereotypes fueled anti-Semitic policies. The Jewish migration to Shanghai is largely unstudied in World War II history, Ms. Cheng told students.

“Besides being novel, this topic is relevant as a study in refugee life,” she said. “We can learn about what it’s like to be a refugee, and also about how countries respond to refugee populations. The study of German Jewish refugees in Shanghai teaches us that history is always global, always transnational. We tend to isolate studies of history, but we cannot think of it as bound by national borders, nor can we think of current events that way.”

As Jewish families arrived in Shanghai beginning in 1938, they faced oppression and poor living conditions in the region, which was under Japanese occupation. Initially, “they tried to escape the burden of everyday life by involving themselves in cultural life,” developing schools, arts programs and sports leagues, Ms. Cheng said. Despite some Jewish immigrants achieving success in business or in partnerships with Chinese people, they were eventually forced into a ghetto for the duration of the war as Nazi powers encouraged Japanese leaders to carry out deadly actions against Jews.

“They were caught between global politics and the aspirations of multiple countries,” Ms. Cheng said. “These refugees’ experiences, their memories and their identities were products of what was happening simultaneously across the globe.”

Ms. Cheng is Chinese-American, the daughter of immigrants from China. Asked how she came to be interested in the history of Jewish refugees in China, Ms. Cheng recalled a professor who explained that although historians may not have a personal connection with their research, all of history is interconnected. “Growing up, I always had a lot of questions about belonging and identity,” Ms. Cheng said. “I think that Jewish history is fascinating as a study of migration and the formation of Jewish identity.”

The current international debate about refugees from war-torn Middle Eastern and North African countries resonates with the stories of refugees during World War II and other periods in history, Ms. Cheng said. “We’re seeing a lot of nativist responses, and countries trying to protect their own. I think it’s important to know that that rhetoric has always been used.”

Ms. Cheng is a doctoral student in the joint Ph.D. program in Hebrew and Judaic Studies and History at New York University. She was a Penn Teaching Fellow in the History and Social Sciences department at Milton. She has also previously worked at the Roman Vishniac Archive at the International Center of Photography in New York City and the archives at the History Center of Tompkins County in Ithaca, New York. She holds a Master’s of the Science of Education from the University of Pennsylvania and a A.B. from Cornell University in History, Jewish Studies, and German Studies.