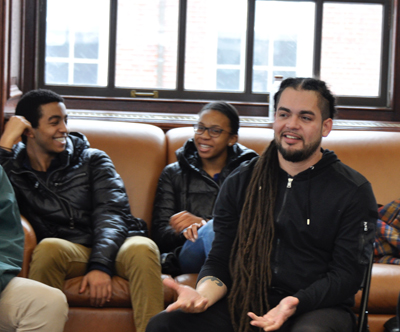 The things that separate people from each other are manufactured, but human beings have few fundamental differences, educator and activist Dennis Febo told students. Mr. Febo was on campus as the Latinx Association’s visiting speaker.

“I think the only way to end racism is if we admit that race itself is not real,” said Mr. Febo, the founder of Guazabara Insights, a health and educational service provider whose mission is to uplift communities.

Racial categorizations are manmade, historically and arbitrarily created by people in power at different times to control or subjugate others, but there are no scientific differences among different races in terms of intelligence or other capabilities, Mr. Febo said. He provided historical context for the racial labels we currently use to categorize ourselves and others. “Caucasian,” or white, people are so called because of an 18th-century anthropological grouping tied to the Caucasus mountains; Africa gets its name from a Roman general and the term “Asian” comprises billions of people so diverse that the word is almost meaningless, Mr. Febo said.

“Some people believe they are superior to others because of their race,” Mr. Febo said. “But when you ask people to explain their own race and its origins, they often can’t define it. Why are we so concerned with something that has no meaning once we break down the truth of our own existence?”

Racial separations and categorizations have been used throughout history to justify atrocities like slavery and war, though scientific advancement has since proved that all humans are nearly biologically identical regardless of race, Mr. Febo said. Now, separation by race only serves to exclude: people of color are often restricted from fair treatment in academic, economic and legal systems; racism toward and among communities of color deepens existing divides, and the everyday “othering” of people—checking off race before a standardized test, for example—has an adverse effect on self-worth.

Mr. Febo spent part of his upbringing in Puerto Rico, among people who identified as Puerto Rican, regardless of their skin color. He then attended eighth grade in Maryland, where he was the only Latinx student in his class, and faced harassment by adults for speaking Spanish or wearing the Puerto Rican flag.

“It was the first time that people in positions of authority confirmed to me that they thought I was inferior,” he said. “How can you look at a child and not recognize the humanity in them? That speaks volumes about a person’s character.”

Labels can help signify a culture and share the rich traditions of a place or people, but they are often used to divide, Mr. Febo said. Instead of using your identities to separate yourself from others, he told students, use them to connect—and to learn about people with different identities.

“Spirit has no color. Spirit has no race or creed,” he said. “Until we accept that, and see that race by itself doesn’t mean anything, we will never get to the point where we have mutual understanding.”

Mr. Febo graduated from the University at Buffalo with a master’s degree and studied in Havana, Cuba and Bahia, Brazil. His master’s thesis was a documentary regarding Puerto Rican Sovereignty entitled “Sazón Batería y Soberanía: Puerto Rico in the Dance for Self-Determination.” He also received bachelor’s degree in Latino Studies, concentrating in history and politics. Mr. Febo has worked as a community organizer, social worker/outreach manager, parent coordinator for the New York City Department of Education, counseled families as a crisis prevention specialist, and managed after school math and literacy programs throughout New York, New Jersey and Pennsylvania.