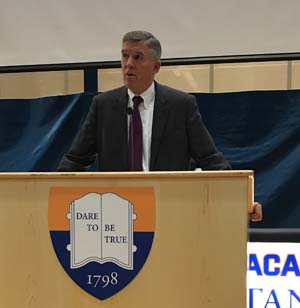 “For what belief, cause or position would you risk unpopularity? What do you care about?” Rod Skinner, Milton Class of 1972 and director of college counseling, asked students these questions on Wednesday as this year’s Veterans’ Day speaker. He continued, “If we confront the real tests of our lives without heart, we are lost.”

Rod told the heroic story of his uncle and namesake, Sherrod E. Skinner Jr. ’47, a Medal of Honor recipient who served in the Marine Corps during the Korean War, where he gave his life for his country. Reading a citation from President Dwight D. Eisenhower, Rod said the Medal of Honor—the military’s highest award—recognized his uncle’s “indomitable fighting spirit, superb leadership and great personal valor in the face of tremendous odds.”

In October 1952, just days before his 23rd birthday, 2nd Lt. Skinner’s outpost came under fire. Twice, he left the protection of his bunker for supplies and to return fire, suffering injuries both times as the Americans held off the enemy troops for hours. He refused treatment until other men in the outpost received care.

Out of ammunition, cut off from communication and still under fire, 2nd Lt. Skinner ordered his men to feign death as their attackers approached. As the North Korean troops retreated they threw a grenade that landed between 2nd Lt. Skinner and two others. Rod’s uncle sacrificed his life by throwing his body on the grenade, an attempt to save his fellow Marines.

From a young age, Rod has been inspired by his uncle’s “shining light,” he says. As he grew older, he learned more about his uncle’s individual charm and rebellious spirit. He also researched other Medal of Honor recipients and noted that they are often people who acted against orders with tremendous bravery. “They saw the right thing to do, and they would not be denied in their pursuit.

“This insight resonates so powerfully with what my father has said about my uncle. He related my uncle’s bravery directly to ‘Dare to be True.’ Rod was true to himself. Too many of us conduct our lives according to what we think others will think, but Rod did not feel beholden in that way at all.”

Ending his speech, Rod encouraged students to approach differences with empathy; to celebrate their connectedness to other people; to be sympathetic to the pain that comes from losing a loved one in war; to not live life “at a smug distance,” but to stand bravely for what they believe; and to “first seek to understand, and then move forward.”

Emotions ran high in the Fitzgibbons Convocation Center (FCC) Wednesday morning, in response to Rod’s story and the results of the presidential election. Prior to Rod’s speech, Head of School Todd Bland addressed many students’ uncertainty about the future, saying, “The beauty of a School community like Milton’s is that during the best of times we can celebrate with great joy, and during times of challenge, we can discuss those challenges with each other and seek to understand.”