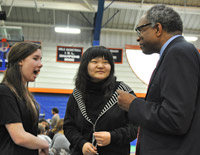 Sparking new ideas and lively conversation, 25 experts and activists on a wide range of publicly debated United States and international issues visited campus for the student-organized Seminar Day. Many Milton Academy graduates were among the guest speakers, stimulating great questions and discussions.

Delivering this year’s keynote address was Dr. Noam Chomsky, Institute Professor in the Department of Linguistics and Philosophy at Massachusetts Institute of Technology. He began teaching at M.I.T. in 1955 and has lectured at many universities throughout the country and abroad. He has written and taught widely on linguistics, philosophy, intellectual history, contemporary issues, international affairs and U.S. foreign policy. He spoke to students and faculty at Milton about pressing issues in the Middle East and related United States policy, addressing Iran, the Arab Spring and the Israel-Palestine conflict.

Surrounding the keynote speaker, students chose from among many presenters during three time blocks in the day. Exchanges that occur on Seminar Day stimulate ideas and conversations over weeks to come. Held every other year, Seminar Day alternates with Community Service Day—another occasion that encourages students to think beyond their immediate community and concern themselves with the complexity and opportunity afforded by the world.