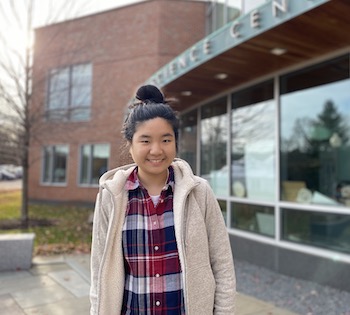 In her junior year, Chen-Chih (Shiloh) Liu ’22 stayed remote due to the COVID-19 pandemic, learning from her home in Taiwan. Still, she was a full participant in her Honors Biology course, completing lab assignments in her kitchen.

And now, one of her experiments has made her a published scientist. Liu’s article, “How ethanol concentration affects catalase catalysis of hydrogen peroxide,” was recently published in the Journal of Emerging Investigators (JEI), an online scientific publication for students in college, high school, and middle school.

“I knew at the beginning of the process that it would be very time consuming and rigorous,” Liu said. “I committed to it. I didn’t want to stop or do anything in between. So, I was glad it got accepted and I’m grateful for the opportunity to do this and go through the peer-review process that you don’t usually get at a high-school level.”

Liu expanded on her design-your-own (DYO) lab from last year; she had found a related article and it prompted her inquiry. Her Honors Biology teacher, Michael Edgar, encouraged her to submit it for publication. She worked throughout the summer—meeting with Edgar via Zoom several times—receiving feedback from the JEI team of graduate students who helped her refine the experiment. They made suggestions to her methods and analysis; then, Liu went through several rounds of edits before finalizing her paper.

“I knew at the beginning of the process that it would be very time consuming and rigorous. I committed to it. I didn’t want to stop or do anything in between. So, I was glad it got accepted and I’m grateful for the opportunity to do this and go through the peer-review process that you don’t usually get at a high-school level.”

“The editing process allowed me to learn a lot of new skills in order to be more professional in my report,” she said. “I had to learn how to do an ANOVA statistical test and be more precise in the calculations of the concentrations I used.”

Liu credits Edgar for working with her throughout the summer on the paper; Edgar said Liu “was a dream to work with” because of her commitment and the eagerness with which she received feedback during the review process. Milton supported remote students with supplies for science classes, but Liu went above and beyond to create a lab experiment at home, he said. 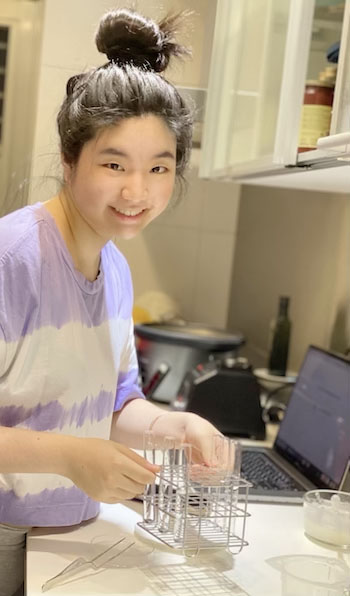 Catalase is an enzyme the human body uses to catalyze and convert hydrogen peroxide into water and oxygen. It plays a particularly important role in the liver. “Catalase is a critical antioxidant enzyme because excessive oxygen can become converted into hydrogen peroxide, which can evolve into hydroxyl radicals that can mutate DNA and cause disease,” Liu wrote. She found that higher concentrations of ethanol reduced the activity of catalase, which could have negative implications for liver function, particularly with the consumption of alcohol.

A handful of Milton students have had their work published in JEI, Edgar said. The work is rigorous, but prepares them well for more advanced review processes and helps them in future science courses at Milton and in college.

“It’s a cool experience to have these outside scientists weigh in on their work,” he said. “There are a lot of iterations and a lot of edits, but the organization is very positive and encouraging, and they make amazing suggestions that help our students get even more out of the process.”