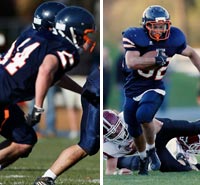 Defensive end Peter Graves (I) and running back Drew Jacobs (I) received the Scholar-Athlete Award for “outstanding football ability, academic application and achievement, and school leadership and example.” On May 4, the National Football Foundation presented the award to Milton’s players during the organization’s 39th annual award dinner.

Drew and Peter are among 33 scholar-athletes from Eastern Massachusetts selected by the Foundation’s board, a committee comprised of college admission directors and high school sports reporters. As part of the honor, the boys’ names will be forever inscribed on the wall of the College Football Hall of Fame.

The senior pair finished their time on the football varsity squad with a remarkable final year. After a 7-1 regular season in which the Mustangs were crowned ISL champions, the team won a New England championship by defeating Dexter in the Tom Flaherty Bowl.

Peter and Drew were dominant forces throughout the year. Drew’s performance on both sides of the ball during the win over undefeated Governor’s—scoring four touchdowns, rushing for 219 yards, intercepting the ball for a 40-yard touchdown, and tackling in double-digit figures—earned him Mustang of the Week. Peter, too, was dubbed Mustang of the Week after his spectacular showing during the win against Roxbury Latin—finishing the game with 10 tackles, a safety, a blocked punt, and four sacks.