We, the students of Milton Academy, under the grant of power given us by the faculty and the administration of the School, for the purpose of self-representation, discipline and responsibility do hereby endorse this constitution of the Self-Governing Association of Milton Academy Upper School students. 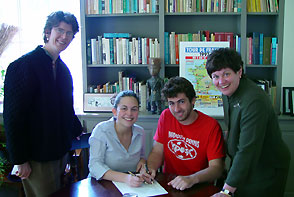 With a few long strokes of a pen, the Self-Governing Association completed their work on rewriting their constitution on Wednesday as head monitors Sophie Suberman and Tom Myers, along side head of school Robin Robertson and Dean of Students Lukie Wells, signed the the Constitution of the Milton Academy Self-Governing Association, 2004. The re-writing process, begun last fall, involved committee work, debate, a “constitutional retreat” among student leaders, a refining period, and finally, a school-wide vote.

When School administrators, in response to a disciplinary action, conducted a reelection process to instate a new head monitor under the guidance of the SGA Constitution—many in the student-community became aware of the constitution for the first time. Frustrated by the reelection process and what they called “vague language” of the document ( last ratified in 1988), the students corralled their frustrations and got to work amending the constitution.

“We didn’t set out to rewrite the constitution because we didn’t like it, the 1988 constitution was too vague. Too many things in the SGA had changed since the constitution had last been ratified,” explained Alex Setiz-Wald, boarding monitor. Boarding representatives were not mentioned n the 1988 constitution, but a half- year rep position, that didn’t exist any more was mentioned. It was a document that didn’t meet the needs of the current council. We wrote a document that would be more thorough, balanced and flexible.”

The SGA worked in small committees throughout the winter months on various sections of the constitution defining roles, election processes and rules. In mid-February the SGA gathered together in a Saturday retreat to debate and refine the suggested revisions, which were then presented to the student-community for a ratification vote. The students voted to accept the constitution in early-April prior to all-school elections.