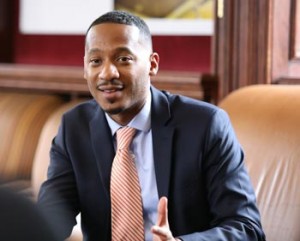 When an act of legislation ends legal discrimination, it does not automatically end oppression or abuses of power, scholar and activist Jamal Grant told students.

“It’s not enough to change bad laws and bad leaders,” said Mr. Grant, who spoke at an assembly hosted by the student clubs SIMA (Students Interested in Middle Eastern Affairs) and Amnesty International. “We have to change the systems that keep bad leadership in power.”

Mr. Grant worked with three other African American scholars and activists to create a film exploring the topics of wealth inequality, race relations, and progress in post-Apartheid South Africa for the Ase (Ah-SHAY) Research Film Project. Mr. Grant was the lead producer for the film, Ubuntu Rising, a documentary covering the legacy of Apartheid: continued social inequality, corruption, infrastructure failures, and poverty.

Marginalized communities around the world, regardless of race, face the same issues, Mr. Grant said. These communities are not inferior to those in power, but they are oppressed—sometimes for centuries—by complex systems designed to halt their progress.

“We felt that we had to tell these stories as truly and completely as possible,” he said of the filmmakers’ approach to the documentary. “We have a tendency to fall out of touch when we’re not engaged with the communities we’re trying to help.”

Filmmaking was a new venture for Mr. Grant, a first-generation American, who was raised by Trinidadian immigrants in Boston. He graduated from the University of Massachusetts, Lowell, with a bachelor’s degree in mechanical engineering, and has worked as a mechanical and aerospace systems engineer at MIT’s Lincoln Laboratory. Mr. Grant is the founder and director of the NET Mentoring Group, a nonprofit focused on closing the achievement and opportunity gap for minorities and young women in STEM (science, technology, engineering, and mathematics) fields. He has participated in international human and civil rights fellowships in Rwanda, Detroit, and Atlanta, where he has studied colonialism, resistance, and social progress.

Mr. Grant is a public-policy master’s degree candidate at the Harvard Kennedy School of Government, where he is a fellow at the school’s Center for Public Leadership.