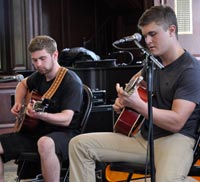 Each year, Class I students may commit their final weeks at Milton to completing a “Senior Project.” Students who are interested must submit research plans in early winter. A committee of faculty decides which projects to approve, and each student aligns his endeavor with a member of the faculty or staff for support. Students in the Class of 2015 chose topics that ranged from aviation to religion, from engineering medical devices to studying social justice. Students painted, gardened, sewed, prepared concerts and recitals, shadowed doctors, coached hockey, learned instruments and languages, and volunteered at a range of sites. Some students completed one full project and others split their time between two half projects. During the week before graduation, students present their projects to faculty and all students. Sharing in this celebration of completed, highly personal work is a favorite Milton Academy tradition.

For his senior project, Shaheen Bharwani (I) tracked news in international affairs with a particular focus on topics related to Islam and Muslims. He presented his project in a TED-style talk this week.

“As a Muslim, I am deeply affected by the representation of my faith in the media,” says Shaheen. “The actions of religious extremists, and what I believe to be a skewed representation in the media affect my daily life by influencing the views of my friends, neighbors and colleagues. This motivated me to undertake media mapping as my project. I gained a fuller picture of how the media represents Islam and identified ways in which the media’s sensationalistic and simplistic representation can be broadened to encompass a civilizational and humanistic approach to topics related to Islam and Muslim societies.”

Ian Kennedy (I) recorded a neo-soul album with Miles Awofala (I) for one half-project and they performed for their peers this week in Straus Library. For his other half-project, Ian set climbing routes on the rock wall in the Robert Saltonstall Gym with Colby Parsons (I).

“Colby and I set many different routes of varying difficulty and style, and did a general investigation into the art of route setting and rock climbing as a whole,” says Ian. “We climbed at Rock Spot every week and talked with the route setters there for tips, as well as climbing and setting every other day of the week. I chose this project because I fell in love with climbing this year and became obsessed with setting routes. My goal was to set more interesting and fun routes, as well as become a better and stronger climber.”

Gianna Beniers (I) interned at a pediatric dentist for approximately 20 hours per week for one half-project and her second project is called, “Making Music for Those Who Need it Most.”

“For this project, I am collaborated with two of my friends (Michaela Brickely (I) and David Tantillo (I)) who share my passion for music,” says Gianna.  “Together, we put together a musical program that we performed at elderly homes, preschools and hospitals.  This project was rewarding in many ways-I got to spend time singing with my friends, and at the same time sharing the gift of music with those who need it most.”

Operating a drone camera and honing their film editing skills, Nick DiGiovanni, Alex Vivado and Jackson Hartwell created a series of promotional videos for Milton. Below is their film highlighting athletics at Milton.” View them all on Milton’s Vimeo site.