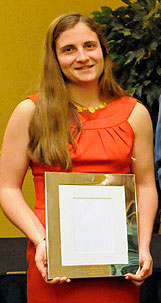 Sophie Panarese (I) is a fierce tennis player with a strong one-hand backhand. She is also gracious and courteous on the court. Earlier this spring, Sophie received the William Hoblitzelle Award, which is given to the USTA New England girls’ 18-and-under player who best demonstrates a superior blend of sportsmanship and leadership on and off the court.

“The award meant a lot—that people think I’m not mean on the court. You don’t have to be mean to play, which many players find hard to do,” says Sophie.

Sophie first picked up a racket around age six and began playing competitively in the USTA at age 12. In middle school, she quit soccer to focus solely on tennis, because she was drawn to independent competition and the focus on individual accomplishment.

She is currently ranked fourth as a USTA player in New England and she is excited to take her tennis skills to Georgetown in the fall, where she will compete in the Big East division for the Hoyas.