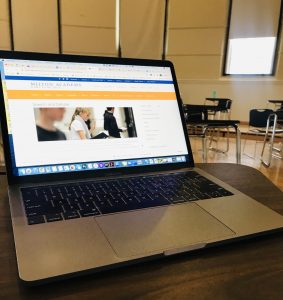 It’s been an unusual but successful year so far for the Speech and Debate Team. They kicked off 2021 competing at the Massachusetts Speech and Debate League’s Happy New Year Tournament, earning several first-place honors in all three divisions of debate as well as numerous speech categories. With all the tournaments held online, students have had to adapt and shift their approach leading to both opportunities and challenges.

Jack Burton’s ’22 primary event is Humorous Interpretation (HI), but he also competes in Duo Interpretation and Dramatic Interpretation. He says the virtual format, especially for interpretive pieces, changes the way the competitor interacts with the audience.

“Bridging a connection with your audience is an essential part of speech,” says Burton. “Without the ability to make eye contact with and elicit live laughter from judges and competitors in the room, speech pieces definitely lose a sense of magic, and it is harder for us performers to engage the audience.”

“Many of the best performers strategically use the camera to add creative flourishes to their pieces,” says Burton. “I have a few methods. For example, I pretend the camera is someone’s forward-looking eye in my Duo. I was able to keep my traditional, blocking-based HI techniques alive, including a cartwheel and a dance sequence, even with the virtual format. Working the camera angle to keep in all the blocking was a big, but manageable, challenge.”

Nika Farokhzad ’23 competes in Congressional Debate and qualified for the National Speech and Debate National Tournament in June by earning first-place honors in Student Congress. She will be one of six students representing Massachusetts at Nationals. Farokhzad said debate does not involve as much movement as some of the speech categories, so the only big difference for her competing online is that she can sit down when she speaks in competition instead of standing up. She says for her, the biggest opportunity was in the interactions with her teammates.

“I’ve been surprised by how close I’ve become with the team, despite the fact that we are all communicating virtually,” says Farokhzad. “This digital experience has brought me closer to my friends. We go through topics together, help each other prep, and call all the time. It’s been a really amazing season despite all of the challenges. Dr. Brandstetter has done a phenomenal job maintaining as normal of a season as possible. I am so grateful for his help with prepping for all of the tournaments. He is always available to us, and willing to meet in the evenings, over the weekend, and outside of school hours. He is a fantastic coach!”

And Burton said, “Our amazing captains have also been instrumental during tournament days, leading warm-ups to wake everybody up. And we have continued our chaotic but fun weekly speech and debate meetings.”