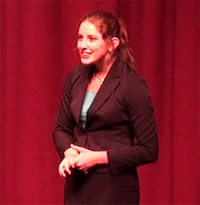 Milton students talked their way to excellence at the Massachusetts Speech and Debate League State Championship earlier this month.

Marshall Sloane (IV) won the Extemporaneous Speaking event, in which students are asked a question regarding a domestic, international or economic issue. The speaker has 30 minutes to prepare an answer. Marshall’s question for the final round was: “How much do the Baltics have to fear from Russia?”

“The key to responding is understanding the issue,” says Marshall, “so I read for at least an hour every day from a variety of news and think tank sources to stay on top of current events. During the competition, I use the first 15 minutes to prep and the next 15 minutes to practice my delivery. I don’t use notes during the actual speech, and I don’t memorize anything except for the first line.”

Emmie Atwood (I) won the Original Oratory event, in which students prepare a speech on an issue of personal importance. Though Emmie is a veteran “speechie,” this is her first year competing in Original Oratory.

“I talked about Thoreau, and about how we are so distracted these days, constantly multitasking,” says Emmie. “I believe we should try to recapture the art of living in the present and apply that to our relationships.” Emmie has been working on this speech all year and refines it after each competition.