For Some, Spring Break Means Building, Music, and Lots of Culture

Constructing and Connecting in Appalachia

Eleven Milton students, with three chaperones, will spend a week in March repairing homes in southwest Virginia. The trip is organized by the Community Engagement Program and Partnerships (CEPP), and the students will travel to a region in the Great Appalachian Valley that has struggled with poverty as coal production has declined.

“Seventy projects in the area have been vetted and are in need of attention,” says CEPP faculty director Andrea Geyling-Moore. “The students will be doing basic construction and repairs in a place where there is serious, day-to-day need. I think this experience will include lots of really meaningful moments for our students.”

The last time Milton students took a service trip to Appalachia was in 2010; recent spring break trips through CEPP have been to the island of Caye Caulker in Belize, where the group managed construction and repairs at the Ocean Academy high school. Realities of the Zika virus kept Milton from traveling to Central America this year, but Andrea assures that the School is maintaining a close relationship with the Ocean Academy. 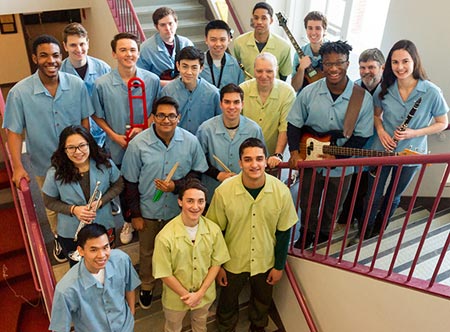 In the 25 years since Milton student-musicians first made the journey, the School and its South African partners have forged bonds that transcend cultural differences, says jazz director Bob Sinicrope.

Twenty-one students from Milton’s eight jazz combos, chaperoned by 13 adults, will leave for Johannesburg on March 7, beginning a two-and-a-half-week tour. Beginning with a performance at the African Leadership Academy—a program for young leaders from across the continent—the Milton musicians will play in schools, in jazz clubs, and at a Human Rights Day township jazz festival in Cape Town.

Milton’s jazz program has a strong connection with the Amy Biehl Foundation, named in honor of a California Fulbright Scholar who worked to promote gender equality as South Africa negotiated the end of apartheid. “The trip provides us with the opportunity to tour as musicians, but also to promote social awareness among our students,” Bob says. “The ability to connect culturally through the language of jazz can be life-changing.”

In addition to performing, the students will tour the Apartheid Museum, a nature reserve, and Soweto—a township instrumental in the resistance to apartheid. They will stay in the homes of local Rotary Club members in Johannesburg for one night before traveling to Durban and then Cape Town.

Milton students were first invited to visit South Africa in 1992 by pianist Ibrahim Abdullah, an internationally renowned jazz musician who came to campus the year before. Since 2001, students have made the trip every other year, bringing with them, in total, more than $170,000 in donated music-education equipment.