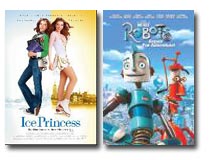 Hadley’s Ice Princess, for whom a high school physics project leads to a love of skating, earns praise from Roger Ebert in the Chicago Sun-Times for beginning with a formula to deliver a fresh, well-acted story that allows even its villains to transform and discover themselves.

“The movie, written by Hadley Davis and directed by Tim Fywell, starts with a formula and then takes it to the next level,” Ebert says. “We have two obsessive stage mothers and two driven overachievers, and the girls want to trade places, to the despair of their moms …This leads to more substance than we’re expecting, and more acting, too, since the central characters don’t follow the well-worn routines supplied by the GCFDDPO formula (Gifted Child Follows Dream Despite Parental Opposition). They strike out with opinions and surprises of their own.”

Hadley, whose screenwriting credits include “Dawson’s Creek” and “Spin City” recently told The Hingham Journal that the Ice Princessscreenplay was semi-autobiographical: Hadley once dreamed of becoming a professional ballet dancer. And, like the film’s heroine, she enjoyed spending winter afternoons skating on a pond in New England.

Hadley also told The Hingham Journal that her Milton Academy English teachers taught her how to write.

David Lindsay-Abaire ’88 is best known as an award-winning playwright. His credits include Fuddy Meers, Wonder of the World andKimberly Akimbo.

“Climactic clash between good and evil feels more chaotic than comedic, but laughs come frequently even during frenetic folderol. Pic overall abounds with clever in-jokey references to other movies – note the guest appearance by a character from somewhere over the rainbow – and other instances of sophisticated wit.”

Outside of live theater and Robots, David has also been writing for television and at work on other screenplays.