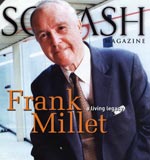 Milton’s beloved Frank Millet as a magazine cover? Mr. Millet would be the last to allow that idea. Squash Magazine, however, succeeded at a wholly appropriate endeavor: the November 2006 issue tells the tale of a avid life-long player, coach and teacher. “Millet has been teaching at Milton Academy since the autumn of 1942,” says writer James Zug. “He’s not a throwback to an earlier era. He looks forward. He still gets on the court. He still plays. He still coaches. He still coaches well—Milton boys went 12–1 last season and came in fifth at the New Englands. He still teaches.”

Mr. Millet was “a keen player ever since he picked up a racket in 1931,” reports Mr. Zug. He opened Milton’s first three squash courts in 1964, a gift of Ralph B. Williams ’26 and Peggy C. Williams, and of other members of the Williams family and friends. 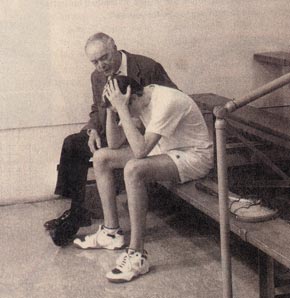 Mr. Millet asserts the important role other coaches in the program have had in Milton’s success, but as Mr. Zug says, “[Mr. Millet’s] key role is as leader.” Zach Segal, squash captain in 1993–94 described the Frank Millet he knew to Mr. Zug: “‘Mr. Millet is very competitive, but he is enormously interested in sportsmanship. ‘Win like gentlemen’ is the motto. He sets the tone. He looks at the big picture—thousand points of light. He gave just the right counsel in between games, after matches. We all saw him as a beloved institution and had tremendous respect for his history, his knowledge and his leadership.’”

“Millet has what might be a record for squash in America—75 years after he picked up the game, he is still playing,” says James Zug, “in the same city.”

From Milton’s point of view, Mr. Millet is still doing many crucial things. He models understatement (“well done” still means the world to players, students and advisees) and modesty. His kind notes in calligraphy are keepsakes; his humor and honesty lend perspective; and his gentle support helps young people through daily challenges, in 2006 as it did in 1942.