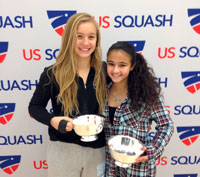 Squash players Ranim Mohamed (III) and Caroline Spahr (Grade 8) won their respective divisions (U17 and U15) at the Baltimore Junior Championship Tournament. This is one of the biggest events on the national squash calendar and both players beat a handful of players ranked in the top 10 in the country on their way to victory.

“Ranim and Caroline are two of the best squash players competing in the U.S. and I am incredibly proud of the fact that they were both able to win their respective divisions at the Baltimore JCT,” says Chris Kane, the girls’ varsity coach. “Both are talented and dedicated athletes who have worked incredibly hard for their success. They both represent the ideals of the student-athlete and match their work on the court with sportsmanship and equally dedicated work in the classroom.”

Both Ranim and Caroline starting playing squash when they were young and they both say the best part of playing squash is “winning!” Ranim is a new sophomore from Alexandria, Egypt. She has had numerous top placements in national tournaments. Caroline competes on the Middle School team and is looking forward to playing for Coach Kane when she moves to the Upper School next year.