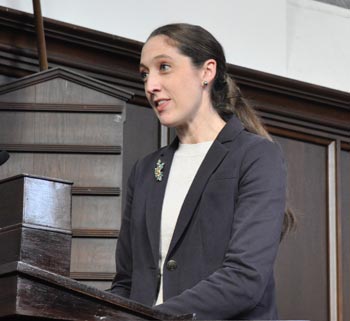 Students can make a difference even before they reach voting age, by committing to hold their representatives accountable, said Jill Ashton, executive director of the Massachusetts Commission on the Status of Women.

Ms. Ashton visited Milton to speak at an assembly sponsored by the student groups F-Word, a feminist publication, and SAGE (Students Advocating for Gender Equality).

While women, people of color, and members of other marginalized groups have made gains in winning elective positions around the country, our representative governments on the state and federal levels often do not reflect the demographic makeup of our communities, Ms. Ashton said. The same holds true in the business world, she noted: There are fewer women working as CEOs of major companies than there are male CEOs named John. Despite evidence that diversity improves the way institutions function, power remains concentrated among men who are often wealthy, cisgender and white.

“We have a long way to go,” she said. “We have to make sure we raise up, and make space for, the voices in our communities that have been marginalized and discriminated against.”

The Massachusetts Commission on the Status of Women is an independent state agency tasked with reviewing women’s issues in Massachusetts and recommending policy changes that would improve access to opportunities and equality. The Commission holds open, public hearings where people are invited to speak or give written testimony about an issue that affects women, girls and families; offer recommendations; or share solutions they have witnessed that could be expanded to other communities.

Domestic violence is a prominent, recurring theme at the hearings, as is access to healthcare and reproductive choice, childcare, employment and housing. Increasingly, the need for resources for elder care has been a focus, Ms. Ashton said.

Ms. Ashton has served as the executive director for the Commission since 2009. The Commission recently supported a landmark equal pay bill that went into effect in July 2018. It has also worked toward expanding paid medical leave in Massachusetts and improving access to contraceptives in recent legislative cycles.