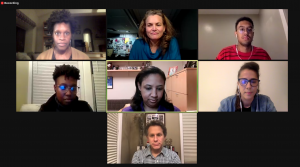 Humanities disciplines like the arts, history, languages, and social sciences can help make the consequences of the global climate crisis more accessible and urgent for people, said anthropologist and University of Massachusetts-Boston professor Rosalyn Negrón.

“One of the challenges we face is that climate action is highly politicized,” she said. “The polarization is a complex problem that doesn’t have easy solutions, but there is a place for the humanities because there are ways in which the arts, film, creative writing, music, and other things people share that can be avenues for communicating about these issues and taking them out of the political domain.”

Negrón was one of four panelists Wednesday who virtually visited about 150 students from Milton and other area schools to discuss climate change and climate justice, this year’s theme for the Humanities Workshop. She was joined by David Abel, a documentary filmmaker and environmental journalist for the Boston Globe; Zoe Davis, coordinator of the Climate Resilience Project through the City of Boston; and Kristala Jones Prather P’22 ’26, the Arthur D. Little professor of chemical engineering at MIT. Edward Moreta ’18, a Kenyon College student and poet, moderated the panel.

Although climate is often considered in a scientific context, there are significant social justice issues tied to climate change. High emissions, widespread pollution, and dwindling resources disproportionately affect vulnerable populations, including communities of color and low-income areas, the panelists said.

The consequences of climate change are dire for Boston and the Northeast, Abel said. As global temperatures increase a projected one-and-a-half to two degrees in the coming years, sea levels will rise, flooding coastal cities and displacing residents. Other things, such as the loss of vegetation that supports clean air and shade, and changing crop seasons, will happen gradually but have wide-ranging impacts around the world on everything from pollution and poor air quality to hunger, longer and hotter heat waves, stronger and more frequent extreme weather events, drought, species loss, mosquito-borne disease, and forced migration.

“I don’t think we’ve done an effective job of communicating what’s at stake,” said Prather, who noted that younger people seem more aware of climate issues and more prepared to take meaningful action than older generations. Although climate change impacts underserved communities more, it will affect the entire world, she noted. “It doesn’t matter your income level or political affiliation. If the sea level rises, you’re going to get wet.”

Negrón noted that some inspiration may be found in the rapid development of a COVID-19 vaccine, as well as the more successful responses to the pandemic. When enough people are effectively motivated to take collective responsibility for an issue, change is possible.

In addition to greater government and industrial measures, people can take individual action to reduce their footprint, like conserving electricity or paying better attention to their use of transportation, Prather said. “It may feel very small, but if it’s done by 10 million people, it will have a significant impact.”

Raising the alarm about climate justice and the need for action is necessary, said Davis—not to create panic, but to be transparent: People need to know what’s at risk and what they can do about it. “We need to look at the future together so that we can be walking together in these issues. It’s the storytelling aspects of climate change and climate justice that are really compelling to people. We’ll need to help people understand what life will look like on a day-to-day basis.”

Next month’s consortium-wide events are a screening of Abel’s documentary, Entangled, on February 10, and a visit from National Book Award-nominated novelist and short story writer Lauren Groff on February 17. Groff is one of Milton’s Bingham Visiting Writers this year.