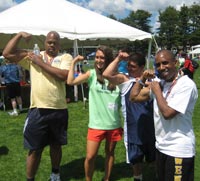 The Milton Academy community service program recently hosted its sixth annual Special Olympics Massachusetts North Section Track and Field Assessment. Over 650 athletes from 30 teams in the greater Boston area competed in running, walking, wheelchair and throwing events to qualify for the state games to be held in June. The event depended wholly on 150 volunteers from the Milton Academy student body, faculty and staff, and their families, along with large volunteer groups from the Milton Lodge of Free Masons, Fontbonne Academy, Thayer Academy, Our Lady of Sorrows Youth Group in Sharon and many individuals. Milton Academy’s seniors, Gabi Sharpe and Laitan Oladipo, opened the Olympics with the national anthem, while Head of School Todd Bland officially welcomed everyone at the Opening Ceremony. Representatives from the Milton Police joined with Campus Safety and our home team, the Milton/Quincy Mustangs, to run in the torch and light the cauldron. Marion McEttrick, chair of Milton’s board of selectmen, declared the games open and then stayed to award medals together with members of the Milton Police.

The Milton/Quincy Mustangs practice on the Academy campus every Sunday morning and are coached by volunteers, including Milton Academy students, for three seasons of competition: soccer, basketball and track.

Click here to view photos of the event courtesy of Mark Chu (II).