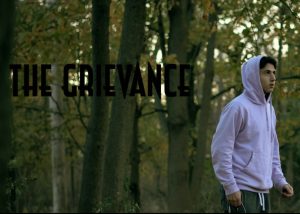 Two student films were accepted into the All American High School Film Festival in the drama category. Dash Evett ‘21 and Jace Fuller’s ‘21 film, The Grievance, featured Conner Hartman ‘21, Ben Simpson ‘21, and Charlie Volpe ‘20. Evett’s’s film, Guy, featured himself and his brother Spencer Evett ‘17. Normally, the films would be presented at a live festival in October in New York City, but this year it will be virtual.

The Grievance is a story about a man named Liam, played by Hartman, who gets trapped in a supernatural cemetery. A bullying incident from his past comes back to haunt him. Evett and Fuller did all the shooting, writing, music, and editing. “A lot of hours of shooting were outside in the cold, and sometimes in complete darkness,” said Evett. “It was my first time making something with a horror vibe, so it was cool to film in a dark cemetery.”

“One of my favorite challenges in filmmaking is giving the audience a proper scare; one that curdles the blood and raises the heartbeat,” said Fuller. “With a low budget of zero dollars, we both agreed we couldn’t show scary monsters or frightening circumstances. Instead, we had to make a psychological horror that could play with scares without showing anything.”

Fuller said despite the less than ideal filming environment, Hartman was “patient and cooperative with us as well thoughtful and invested in his acting. He, and the rest of the cast, Volpe and Simpson, brought this film to life in a way I couldn’t have ever imagined.”

Evett’s film Guy is about a young man, James, who’s stuck in life and finds a man living in his basement. This man eventually helps the main character reflect on his life. “This film was easier to make,” said Evett. “It was a lot more of a personal film, kind of shedding a light on how people sometimes tend to ignore their own insecurities and blame things on other people. I think it’s reflective of my style as a filmmaker. I like films about people that are very raw and vulnerable. It’s more real when your characters are more human and flawed.”

Both Evett and Fuller said they are thrilled to have their films recognized and credit Milton and their friends with helping make their dreams a reality.