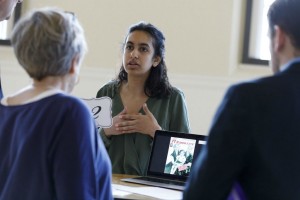 Students and faculty gathered for the spring tradition of Bisbee Prize presentations last Thursday. The nine winners were selected by their teachers for outstanding research on their U.S. history papers. The event in Wigglesworth Hall followed a new format that allowed for “students to have more in-depth and organic conversations about their process and work,” according to Robert McGuirk, history department chair. Students stood at individual tables where they could discuss their research with small groups of their peers, faculty, advisors and parents. Topics ranged from the 1918 Spanish influenza epidemic to the devastating effects of United Fruit’s banana monopoly.

The Bisbee Prize was established to honor Ethan Wyatt Bisbee, a former history faculty member who retired in 1993 after 40 years of teaching. The Prize was endowed in 2005 through a gift by John Warren, formerly of the history department, and his wife, Laura Warren ’78, former head of Robbins House.

Recipients of the 2019 Bisbee Prize are:

Margot Becker (II)
Dogmas of the Quiet Past: Containment Policy and the Vietnam War

Neshaat Bharwani (I)
The Turban: Unraveling a History of Cultural Mimicry as a Means of Protection, Status Elevation, and Protest against Prejudice

Zachariah Ibrahim (II)
The Ghost of a Forgotten Past: The West’s Failure to Perceive the Resurgence of Ethno-Nationalism in Yugoslavia in Post World War II Europe.

Devon Whalen (II)
Buh or Brer? Interpretation of the Tar Baby Story as a Reflection of Gullah Culture in the American Sea Islands

Katherine Wilcox (I)
The Banana Split: How United Fruit Fractured a Continent in the Name of the Banana and Why the United States Let Them

Christy Zheng (I)
POWerful Revelations: How Friendships and Humanity Overcame the Initial Racism and Bitter Divisions of War