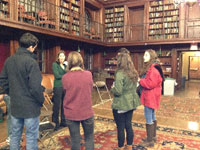 This year’s editors of The Milton Paper, Milton’s independent student newspaper, shared a top priority. When Adam Beckman (I) and Cydney Grannan (I) became editors-in-chief they were intent upon bringing their peers’ writing to the next level. “The writing quality of The Paper was always good, but we knew that if we worked hard, we could make it better,” says Cydney.

The pair agreed that reaching their goal demanded certain steps as they led their team. They committed to rejecting articles that didn’t meet their standards; asking former writers to reapply for this year’s positions on The Paper; appointing at least three editors to every article; and giving constant feedback. This season, they also purposefully connected student journalists with professional journalists who could come to campus and share insights about the field today.

On their own, Adam, Cydney and their staff contacted professionals in Greater Boston, and this semester three career journalists accepted the students’ invitation. The upshot is a powerful series of workshops and seminars for the staffs of The Paper, and the School’s official student newspaper, The Milton Measure.

Helen Smith—an award-winning journalist who has worked with high school writers for decades—held the first workshop, on sports writing. She advised Milton’s sports writers on topics, writing style, and section layout. With Helen, students edited and shared thoughts on several sample articles. “I’ve worked with Helen several times now,” says Cydney, “and she’s a legend. She has worked with high school writers for so long that she really understands how to reach us, and how to help us improve.”

Cynthia Needham ’95, Milton alumna and metro political editor for the Boston Globe, came to campus to talk with students about the daily schedule and pace of a newspaper. She also focused on writing strong leads, handling difficult interviewees, and keeping personal views out of articles. “Cynthia’s visit was so valuable because she gave us a real sense of how the work we do on The Paper plays out on a much larger scale,” says Adam. “That perspective was helpful for me, and for our writers.”

To complete the speaker series, Martin Baron, editor-in-chief of the Boston Globe, will speak with students on March 27 at 7 p.m. in Wigglesworth Hall. All staffers of both student papers will attend, and the editors encourage other interested students to join the conversation.

Check out the newly launched online version of The Milton Paper at www.themiltonpaper.org.