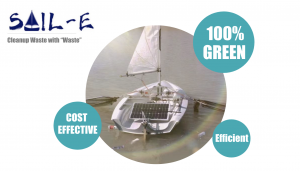 Lan Hai ‘23 participated in the Conrad Challenge, an international student-driven, project-based science and technology competition to solve problems with a global impact. Hai and two peers from her hometown of Shanghai developed, programmed, and retrofitted a sailboat to pick up plastic garbage while it sails. Their project, called SAIL-E, finished in the World’s Top Six in the Ocean Plastics Category.

Hai said their idea used “end-of-life boats,” which are sailboats that can’t be used by people anymore, but which contain fiberglass that is very costly, polluting, and inefficient to recycle.

“Right now there is no good way to recycle boats,” said Hai, who competes on Milton’s sailing team. “It’s a big problem that’s underrated. So we took an end-of-life boat, an actual sailboat, and modified it to be a garbage collection boat. Our solution is a lot cheaper than current garbage-collecting boats. After the competition’s national rounds, we added a solar panel, so the motors, which run the rudder and nets, run on solar power and there are no emissions.”

Hai’s team programmed the motor’s software using arduino code, and tested their prototype in a Shanghai river, standing on the shore using a remote controller to steer and work the garbage collecting nets.

The competition required teams to reach out to professionals in  respective fields for collaboration, which Hai said was one her favorite parts.

“Talking to and collaborating with professionals in the field was so interesting,” said Hai. “We talked to the CEO of one of the largest sailboat makers in China. She was really interested in our project. And said she wants to continue to support us and make our end-of-life boat program into a global program. We also talked to NGOs and sailing clubs.”