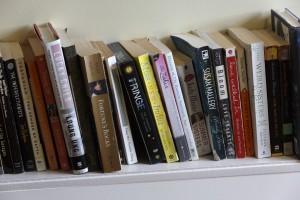 “One of the essays I wrote for my nonfictions class,” says Akua. “It’s about my father and his immigration story of coming to America from Ghana. It’s also about how I think about success and living up to expectations. When I first started writing in my English classes, it was hard to write about personal stuff, but now I’m comfortable writing about stuff closer to home. You gain confidence in yourself.”

Erika’s gold medal-winning poem was informed by her “new role as an upperclassman, inspiring me to rethink how previous years experiences shape my identity today. ‘When We Are Old Enough’ is both an ode to childhood summers and a mourning for the gradual loss of innocence and ambition through age. The poem begins with scenes of purity and illustrates the speaker’s attraction toward the mystery of being older. As the poem progresses to the second stanza, the speaker grows to feel love and lust, yet the moment is only fleeting. The short-lived moment is compared to the fraying of telephone poles with the passing of countless summers.”

“‘Seven Ways’ is about my youngest sister, who was 7 at the time,” says Malia. “There are seven parts and each one is a different perspective on questions she would ask me. It’s fascinating how the younger mind works; how she tries to understand big topics like politics or the passage of time. All the big and cool questions that little kids ask that you don’t expect.”

Evita Thadhani (II) was also recognized by the Smith College Poetry Prize as a finalist for her poem “Life Rules.”  And Hana Widerman’s (I) poem “What My Mother Texts Me When I’m At School” will be in an upcoming issue of Washington Square Review, an award winning literary journal published by New York University’s Graduate Creative Writing Program and her poem “Origin Story” will be published in Asian American Literary Review.