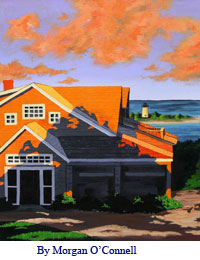 Five Milton students were national medalists in this year’s Scholastic Art and Writing Awards. Twenty-five students earned awards in the Boston Globe Scholastic Art and Writing Awards, the regional division of the prestigious program recognizing the creative talents of middle and high school students. In the Globe competition, over 8,000 students submitted work in 28 categories.

In addition to her national Gold Medal and several regional awards, Yvonne Fu (I) won an esteemed American Voices Medal, which recognizes written work displaying originality and technical skill, while making a statement about teenagers today. Her Gold Medal was for a journalistic piece she originally wrote for Two Leaf Nation, an e-magazine focused on China. Yvonne’s article, which involved analyzing a lot of data, examined the admission quota program of China’s university system. Yvonne’s other awards recognized her poetry and creative writing talent.

“I love all forms of writing,” says Yvonne. “Journalism writing is extremely difficult—they are all difficult, really! In Creative Writing, Ms. Baker is so inspiring, and she offers great feedback. I submitted about three years worth of poetry for the awards. I write about China—the cultural and political aspects. I write about women, and wanting to have it all. I also write about family, because I’m away from home.”

“I wrote both pieces outside of class, over school breaks,” says Patrick. “Writing has become a passion of mine, and I often write simply for the satisfaction it brings me. Winning the award was huge, because it was the first time my work was recognized outside of school. The award symbolized for me that writing is a productive use of my time.”

Morgan O’Connell (I) won several regional awards for her paintings. She paints primarily with acrylics, though, this year, visual arts faculty member Ian Torney introduced her to oils. Many of Morgan’s paintings are set on Martha’s Vineyard, and she created her award-winning piece “South Beach” on commission for a restaurant in Marshfield.

“I spent the summer working on that piece; it was my summer job,” says Morgan. “I love movement, like ocean waves. My Advanced Independent Art project is focused on the movement of water. I like to paint from photographs, capturing a moment that people don’t normally see because it passes so quickly.”

Other students earning national awards in this year’s competition were Emmie Atwood (I), Charlotte Goddu (I) Dianne Kim (II) and Sarah Lew (I).