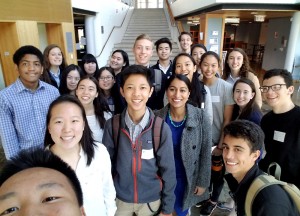 The student-run Independent School Sustainability Coalition (ISSC) held its first one-day conference at Milton to discuss sustainability issues and exchange ideas and initiatives. The coalition was the idea of Ariane DesRosiers (III), who was inspired by the online literary publication The Tavern, a collaborative effort among independent school students. Pierce Wilson (III), Patrick Huang (II) Max Hui (II) and Jennifer Chen (III) also played roles in forming the ISSC, which is made up of 21 schools from all over New England. Seven schools attended the conference.

“When I’m working on sustainability issues at Milton, I sometimes feel like it’s always me and the same 15 students,” says Ariane. “I was happy to see so many other students who are working on and saying the same things I’m doing and saying. It was nice to hear these similar voices. I also loved learning what other schools are doing and different ways to get the community involved.”

Pierce was instrumental in arranging the keynote speaker, Chantelle Mendonsa, who works for the Center for Policy Advocacy at the Natural Resources Defense Council.

“Chantelle was involved in sustainability issues when she was at Brooks School, and at Syracuse University, she co-founded a student organization focused on the divestiture of fossil fuel investments from the school’s endowment,” says Pierce. “She spoke about the election, our new president and the administration’s view on climate change and environmentalism as a whole. And she talked about her experiences and how we can make change, even in high school.”

The rest of the conference consisted of two breakout sessions before the group came together and developed a detailed, two-year agenda with action items for the students to take back to their respective schools.