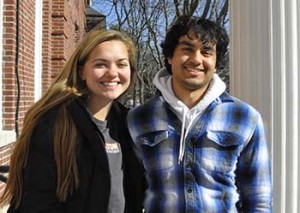 Emma Bradley ’20 and Kiran Biddinger ’20 wanted to perform a “complicated” lab experiment for the Honors Biology class they took as juniors. One year later, their findings have been published in a scientific journal.

“It was really difficult to figure out what we were going to do,” Bradley said. “We were in the lab all the time, for weeks straight.”

Their report, “Temperatures of 20°C produce increased net primary production in Chlorella sp.” was accepted by the Journal of Emerging Investigators, a monthly publication that features the work of middle school, high school, and college students. The work must be sponsored by a faculty member—the duo’s sponsor was Science Department Chair Julie Seplaki—and undergo an extensive editing process before it can be published.

The pair join Alaina Cherry ’20 and Allison Reilly ’20, whose paper, “Longer Exposure to 2% India Ink Increases Average Number of Vacuoles in Tetrahymena pyriformis” was published in October 2019 by the Journal of Emerging Investigators.

In their experiment, Bradley and Biddinger found that chlorella—a kind of single-celled green algae—reached maximum efficiency around 20° celcius (about 68° Fahrenheit). Chlorella is an autotroph, which means it can produce its own food and energy from its surroundings, including light, water, and carbon dioxide. Net primary production is the rate at which the organism photosynthesizes, minus its cellular respiration. In this process, chlorella can turn carbon dioxide into glucose.

The two began editing their assignment report to submit to the journal in the spring of 2019, with help from Seplaki and other teachers. It was accepted in October and published in February 2020. Milton science teachers place a strong emphasis on being able to communicate about scientific concepts, which is why Seplaki encouraged the class to consider pursuing journal submissions.

“You don’t realize how extensive the editing process is until you do it,” said Biddinger. “We got a lot of good feedback about the style of our writing, and where we needed to explain the process in deeper detail.”

One of the implications for their experiment involves climate change, Bradley said.

“The importance of finding its optimal temperature is that we found where it’s best at removing CO2 from the environment and turning it into a beneficial byproduct,” she said. “So we think it has potential as a sustainable food source.”

A link to the study is currently featured on the Journal of Emerging Investigators’ homepage under “Latest Research.”