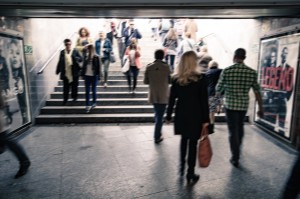 Students are back, fully immersed in classes and school life, but only a few weeks ago it was beach, naps and work—lots of work. Many students spent their summer working internships and jobs; sometimes more than one. Here are just a few experiences.

Manciana Cardichon (I), a day student from Boston, and Alex Shih (I), a day student from Newton, interned at Brain Power, a startup in Cambridge that works with Google Glass and  other devices to develop apps for kids with autism. They were the only high school students in the office, and Manciana was the only female on the development team. They worked every weekday for seven weeks in July and August.

“Alex and I came in at a prime time in the company’s history, because they were preparing to ship their product to customers in August,” says Manciana. “I worked with Alex to design pages for one of their apps in a game development platform (Unity) that uses C++.  I also ran tests on their apps on the Google Glass and ran focus groups to find and fix bugs. I wrote some of their web portal pages in HTML that went live for customers! I enjoyed this because I could see it go live instantaneously. Although I was nervous about fitting in and finding my place at first, everyone was welcoming, treated us like one of the team and held us to the same standards.”

John Albright (I), a day student from Milton, interned for six weeks at the campaign headquarters of Massachusetts Governor Charlie Baker. He also interned there last summer. Governor Baker is running for re-election this November.

“My internship on the finance team primarily entailed donor relations; in essence, reaching out to high-profile donors and asking for contributions to the campaign,” says John. “The experience introduced me to the day-to-day particulars of a nine-to-five job—waking up early to drive to the train, attending lunch meetings with prospective donors, and reporting to a superior. In addition to being my first work experience, this internship reaffirmed my growing interest in policy, particularly in Massachusetts’s geopolitical landscape. Although my position was in finance, I was attuned to many of the ongoing issues in local policy: education, economy, the opioid crisis, transportation, and even specific town ordinances.”

Erinma Onyewuchi (II), a boarder from Maryland, worked for three different companies, putting her video-editing skills to the test. At Black Career Success, which advises job-seeking minorities, she was the video editor and she “loved being part of a larger team and seeing my work on social media platforms.” At Fit Worldwide, a health and wellness company, she was the video editor and also did event coverage of their workshop. “This was my favorite part, because I met clients face-to-face and I got to work with the camera to try to make the event look as interesting as possible.”

With Beyond the Stage Productions, a black-owned production company, Erinma was the production assistant/intern for their documentary series focusing on the music scene in the Washington, D.C., Maryland and Virginia (DMV) area. “I was mainly responsible for taking notes during meetings, keeping tabs on production schedule, and adjusting lighting and audio implements on set. I was also lucky enough to meet many of their subjects, who not only had amazing insight on DMV culture, but were amazing individuals.”

Nina Sidhu (I), a boarder from Florida, worked as an environmental intern for the Walking Mountain Science School in Colorado for eight weeks. “We spent the first hour of every day in the classroom learning about environmental preservation. Then we worked with the U.S. Forest Service to help collect data on different aspects of wildlife out in the field, which was my favorite part. We did forest restoration, weed pulling, stream surveys, boreal toad surveys and fish shocking. I was fascinated with the material we were studying and the projects that we worked on, and I enjoyed knowing that I was making a positive impact on the environment and on the community.”

Evita Thadhani (II), a day student from Boston, worked for a month at the Jewish Journal in Los Angeles, which publishes a weekly paper both online and in print. Evita interned as a community writer covering local stories. “My first story was about an anti-separation of families protest happening on Tisha B’av, a Jewish holiday of fasting and mourning. At the protest, I was met with several asylum seekers to hear their story. I also wrote articles about a kosher food truck, about an artist who was in a bike accident, and a Q & A with a Persian Jewish gay man who started a Persian LGBTQ program. The last article I wrote was a column about what it was like being non-Jewish at the Jewish Journal and what I learned about religion and the importance of a religious community. I also helped with editing a little bit and busy work. I had a very educational, fascinating experience.”