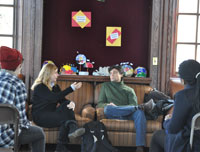 Next month, students will stage a production of The Laramie Project in King Theatre. This week, two of the show’s creators visited campus to talk with students about Matthew Shepard, creative theater process, and the role performance can play in national conversation.

During Wednesday’s GASP! (Gay and Straight People) assembly, actor Andy Paris and director Leigh Fondakowski shared the story of how The Laramie Project came to be. The two members of Tectonic Theater Project are this year’s Melissa Gold Visiting Artists. Tectonic, a New York City-based theater group, is best known for the innovative play, in which actors portray various members of the Laramie community, the Wyoming town where college student Matthew Shepard was beaten and killed by two local men in 1998. The anti-gay hate crime drew worldwide media attention and propelled federal legislation to prevent future crimes against gay, lesbian, and transgendered people.

Mr. Paris and Ms. Fondakowski told students how shortly after Matthew’s death, the theater’s founder asked them, “Do we, as theater artists, have a role to play in the national conversation around Matthew’s death?” Ten Tectonic members decided to visit Laramie and interview residents with a list of questions the group developed together.

“In the media, Laramie was portrayed as a redneck, ‘Wild West’ kind of town,” says Mr. Paris. “We thought there had to be a bigger conversation about what happened and the culture of the community. We wanted to convey who these people were.”

The group returned to New York with recorded interviews that they transcribed into hundreds of pages. “We still weren’t sure there was a play there, but we began reading the interviews to one another,” says Ms. Fondakowski. “After a while, the actors began to take on the personas of their interviewees, even incorporating props. This evolved into nuggets of theatrical time. It became a collective experience that told the story about Matthew and the whole town.”

On Thursday evening, the Tectonic members will screen the HBO version of The Laramie Project in Straus Library. This February, Milton students will perform the show under the direction of performing arts teacher Eleza Kort.