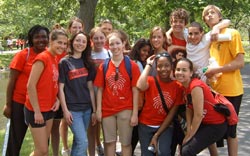 “We arrived in time for the opening ceremonies, did some stretching, walked the 6.2 mile route, and spent an hour looking around the Wellness Festival at the end of the walk,” said Corina Chase (I). “As a team, we raised $2,271 for the AIDS Action Committee of Massachusetts.”

The AIDS Action Committee of Massachusetts, New England’s first and largest AIDS organization, is dedicated to stopping the spread of HIV/AIDS by preventing new infections and optimizing the health of those already infected.