Students Speak Up at State House for Voting Changes 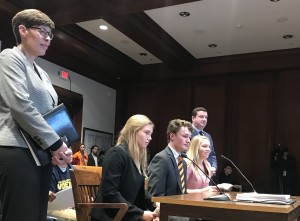 Samantha Bevins ’21 testified before the Joint Committee on Election Laws at the Massachusetts State House on H.4161, her proposed legislation to allow young people who are 17 to vote during primary elections if they will turn 18 in time for general elections.

“We are simply trying to give those of us old enough to vote in the general election the right to pick the candidate for whom we will ultimately vote,” said Sam, who spent hundreds of hours researching and gathering support for the bill. Sam is a day student who lives in Hingham, Massachusetts.

Ben spoke about how Generation Z, those born after 1997, is the “largest and most diverse generation our nation has ever seen.”

“This bill allows young people, who are the future of our country, to fully experience their first election process,” said Ben. “It also sets the habit for young people to invoke their civic duties to vote in both the primaries and the general election.”

Josie spoke spoke about how today’s youth are better informed because of technology and social media.

“I have been counting down the days until I can vote for years,” said Sam. “There are 286 days left, by the way, and I am hoping that you could shorten that count down to 41 days for March 3—if not in time for me, in time for all the generations of Massachusetts youth still to come.”

It was an inspiring afternoon of youth action as there were other youth voting-related bills on the docket. The hearing room was packed with students, friends, families, local politicians, and the media. 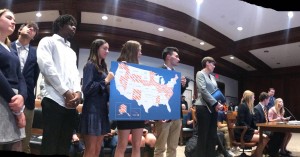