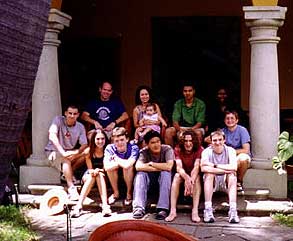 The participants were Spanish students, of different classes and ability levels, who wanted to improve their language skills and learn about Mexican culture, Jenny said.

Sam Stone (Class III), of Marion, Massachusetts, said he was at first afraid when he saw an anti-war protest from a museum window one afternoon. “I felt because I was a white American tourist that every Mexican would believe that I was supporting Bush’s [notion of] the ‘axis of evil,’ for in the protests there were our flags with swastikas replacing the stars.

“Days later, when talking with my host student, I learned that most Oaxacans don’t have that stereotype in mind.” Sam also said that he found the Mexicans he met to be hospitable and friendly. “They take you for who you are and don’t judge you by the clothes you wear or the color of your skin.”

John Choi (Class II), of Seoul, Korea, said he was excited to arrive and see Spanish text on billboards, street signs and stores. He also loved the architecture, he said. “There were many open spaces within the houses there. The patio was the center [of outdoor space]. The buildings were colorful and interesting.”

In Mexico, each student stayed with a local family for the duration of the two-week trip. Language and cultural classes at the Cultural Institute of Oaxaca, located on a 19th century estate, occupied students’ weekdays. Sunday excursions were to Monte Alban, Zapotec ruins; and Hierve el Agua, petrified waterfalls and natural springs.

Students also explored the Mayan city of Oaxaca and spent time practicing Spanish with their host families. “They all came back with improved language skills and a greater understanding and appreciation of Mexican culture,” Jenny said.