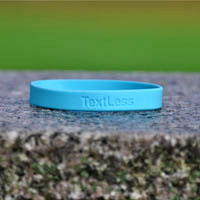 More than 470 students are shutting off their cell phones today as part of the “TextLess Live More” campaign. Three students—Emmie Atwood (I), Kaitlin Gately (I) and Abby Lebovitz (I)—organized the initiative to honor Merritt Levitan ’13 who was killed when struck by a car during a group, cross-country bike trip in July.

“Often, we live not in the real world but in the virtual one, checking our Facebook pages, our email, our Twitter accounts,” says Emmie. “Merritt, however, lived in the most real way possible. She was always completely attached to what was happening right in front of her. She embodied life in its truest form. Although the TextLess campaign is designed to prevent texting and driving, we want our movement to be bigger than that: Our goal is to decrease excessive phone use and encourage people to focus on the interactions taking place right in front of them. In this way, we want to honor Merritt’s authentic and present way of living.”

During Monday morning’s assembly, students held a moment of reflection to remember Merritt; they are donning blue bracelets as part of the campaign. Organizers are eager to increase the numbers of students involved “from 70 percent up to 100 percent” they said in explaining the drive. October 7 is the first TextLess day in a series.

“If we do this for only one day, it’s meaningless,” says Emmie. “We want the campaign to be active and continuous, so we will do things throughout the year. We are contacting other schools, and some students from other schools are signing on.”

The girls hope to host a Class I viewing of the film From One Second to the Next, a documentary by Werner Herzog showing the dangers of texting and driving. According to the National Highway Traffic Safety Administration, in 2011, 3,331 people were killed in crashes involving a distracted driver. Of drivers 15- to 19-years-old involved in fatal crashes, 21 percent of the distracted drivers were distracted by the use of cell phones.