Success On the Water for Milton Sailors 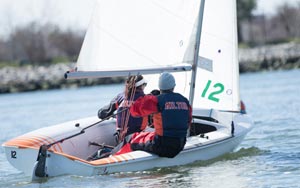 One major accomplishment of the sailing team’s successful season (19-3-1) occurred off the coast of Charleston, at the ISSA High School Double Handed Championship for the Mallory Trophy. Milton’s A Division fleet racing boat, skippered by Henry Burnes (II) with Peter Baron (II) as crew, placed fourth out of 20 boats—the best result for a Milton fleet racing boat in team history.

Over two days, Henry and Peter sailed 20 races. Both sailors cite strong communication and race-to-race consistency as keys to their success as a team.

“I describe sailing as trying to do sit-ups while going through little hills and playing chess—all with one armed tied behind your back,” says Peter, pointing to the physical and mental rigors of the sport.

At the Championship event, Milton’s Division B boat was skippered by Eli Burnes (II) and crewed by Charlie Hibben (III). The two teams earned Mallory spots after qualifying in a New England regional event.

During the spring season, the Milton team focuses on “team racing,” in which three boats from one school compete against three boats of their opponent. In this scenario, the teams are Henry and Peter, Eli and team captain Emily Grace (I), and Charlie and Ginny Alex (II). Milton has 12 boats at a marina in Quincy, where they practice under the guidance of Coach Patrick Broome.

“One of our primary goals this season was to qualify for the Baker Trophy, which is like the Mallory Trophy, but for team racing,” says Patrick. “About 100 schools in New England have sailing programs, and only six to eight schools have realistic hopes of going to the Baker nationals every year. We are fortunate at Milton—to have the Baker as a realistic goal.”

Milton placed fourth in the New England qualifier for the Baker, but only the top two teams moved forward to nationals. However, Milton’s team is young, and they are hopeful for an even stronger season next year.

“We had a really successful season,” says Ginny, “and it was actually a building year for our team. We learned more about our strengths and weaknesses, and we’ve figured out ways to get better and work out all the kinks.”

Last fall, Christina Sakellaris (II)—who sails for two different clubs, depending on the season—represented Milton in the single-handled fleet racing New England qualifier for the national event, and she came in first place. At the national event, she placed eleventh. Though Christina did not race for Milton during the spring season, she plans to next year.