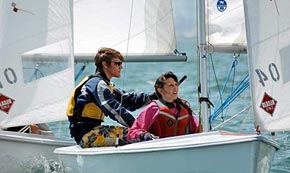 The Milton Academy co-ed sailing team traveled to Long Beach, California, the weekend of May 12 to compete in the National High School Sailing Championship where they finished sixth in the country for fleet racing. The team’s road to nationals has been paved by a successful season overall.

Katie St. George (Class II) cites the resiliency of this year’s team as the source of its success. “We can lose one race and then come back and win the next three,” she says. “Our team has such a positive attitude, and we’re able to maintain it, which is so important. One bad race doesn’t get into our heads. So many teams will lose a race and get down on themselves. We can come back strong and pull through when we need to.”

The team competes the weekend of May 19 in Duxbury, Massachusetts, and the following weekend in New Orleans for a spot in the team racing national championship competition.