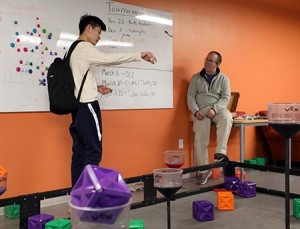 The robotics team is on a roll this year, with three robots qualifying for the U.S. Open Robotics Championship in Iowa in April. Under the leadership of team captains Diego Domenig ’20, Avery Miller ’20, and Tony Tao ’20, the team participates in VEX Robotics, which challenges students to design and build robots that compete against others in a small arena where the robots complete certain tasks for points.

Freshman Ryan Shue, who drives one of the robots, says, “It’s great to work with people who have the same interests as you. And it’s a fun way to apply that interest in and knowledge of engineering.”

Every day after school, team members meet in their space down in the basement of the Art and Media Center. “They’re here all the time, until 6 p.m. on weekdays and later on Fridays,” said Chris Hales, computer science department chair. “They are so dedicated. They put in the time so they can improve and succeed.”

Before nationals, the team will compete in the Southern New England VRC High School Regional Championship in mid-March. This competition is important because it’s a chance for the robots to qualify for the VEX Robotics World Championship, which will be in Kentucky in late April.

Ryan and Tony both said one of their favorite competitions this year was the Night at the Museum, held at the National Air and Space Museum in Virginia. Sixty of the best high school teams from around the world competed in a room holding the space shuttle Discovery.