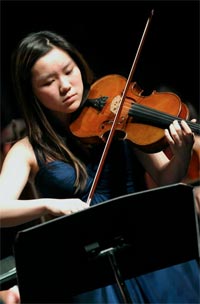 Two concerts entertained audiences this past weekend in the Kellner Performing Arts Center. On Friday, April 26, the sounds of Gilbert and Sullivan filled King Theatre as the Glee Club sang sections of Pirates of Penzance. The chamber singers took the stage, joined by the Wellesley Choral Society (WCS), to perform three movements of Ludwig Beethoven’s Mass in C Major. Ted Whalen of the music department is music director of WCS, and the Milton singers will join them in a full performance of Beethoven’s Mass on June 5 in Wellesley.

On Sunday, April 28, the second concert event opened with three separate chamber music performances—a percussion ensemble, a flute quartet, and a cello quartet. The chamber orchestra performed a baroque Vivaldi flute concerto with Natasha Zuzarte (I) as the featured flute soloist. The second piece was Georg Phillipp Telemann’s Viola Concerto in G Majorfeaturing Brittany Lee (I) on viola. Vocalist Alé Gianino (I) joined the chamber orchestra to sing Franz Shubert’s Gretchen am Spinnrade (Gretchen at the Spinning Wheel). The full orchestra whirled the audience through Europe as they performed a Czech march, a Viennese Polka, an Elizabethan dance, and then closed with a selection of music from Les Misérables.