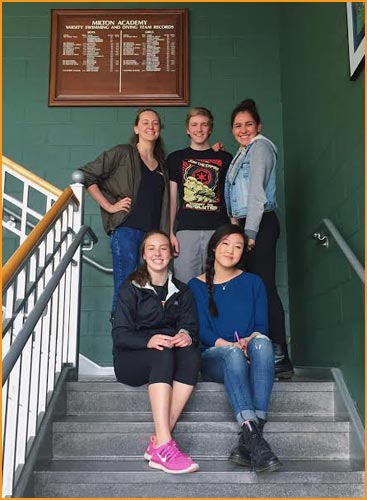 A  look on the  ACC  wall before and after spring break would find new names and faster times after nearly half of the former swim team records. This winter, the boys’ and girls’ swim team broke ten of the 22 posted records.

Lilly Vivado (II) led the way, rewriting the record board in five individual events.  In the 200 freestyle, Lilly broke the 2004 Milton record by over seven seconds and set a New England Prep School record of 1:49.53, touching out the previous record holder by 0.3 seconds.  Lilly also won the 100 butterfly at the same meet; her time was more than four seconds faster than the 1995 record.  Earlier in the season, Lilly broke the records for the 100 backstroke by nearly three seconds, the 200 individual medley record by over five seconds, and the 500 freestyle by over 23 seconds.

Casey DeLano (III) also had an impressive season, breaking Milton records in two individual events.  At the New England Prep School Championships, Casey finished third  in the 100 freestyle with a Milton record time of 53.40.  At the same meet, Casey placed fifth in the 100 breaststroke with a time of 1:09.43, 2 seconds faster than the 2000 Milton record.

The boys 200 Medley relay team contributed the tenth record breaking swim to the team’s 2015 season.   The team of JJ Batt (III), Harrison Jia (III), Robbie Warming (II) and Thomas Hannah (III) dropped two seconds from their prior best time to break the record with a time of 1:42.00.