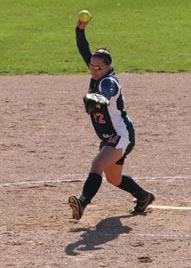 Adding another convincing win on Wednesday against Southfield by a score of 22-13, the varsity girls’ softball team upped their season record to 8-1, and stand undefeated in the Independent School League (ISL). Head Coach Amy Hickey attributes the latest win to the Mustang’s “steady” defense, consistency of pitchers Isa Gell-Levey and Maddie Gallagher, and Milton’s “patience at the plate.”
“Milton’s offense was led by Jane Ghublikian who was two for three, including two homeruns, five RBIs and four runs scored,” said Coach Hickey. “Alana Dovner was three for six with one homerun, four RBIs and two runs scored. Dovner also had a nice double play, catching a line drive at third and throwing out the advancing runner in the fourth to end a Southfield rally. Alex Jaeger was two for three, including two doubles, two RBIs and three runs scored. Isa Gell-Levey was also two for three with two RBIs and four runs scored.”The team’s only loss this season was against a strong Tabor squad in mid-April.  Since that day, the Mustangs have bested a line of tough teams including Brooks, Thayer, Lawrence and Southfield.  The success of Milton’s squad and their first place standing in the ISL has even caught the attention of the Boston Globe.  The girls’ next bout will be against Governor’s at home on Saturday, May 2, starting at 3 p.m.