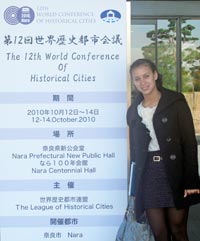 Sydney Sykes, Class II, has long been interested in architecture, her heritage, and cultural sharing. This month she indulged all three passions in Nara, Japan, at a conference that gathered representatives from the some of the oldest and most historically rich cities around the world. Sydney was a Youth Forum member of the Twelfth World Conference of Historical Cities. The conference is organized by the League of Historical Cities whose mission is to promote world peace through communication and cultural sharing. Boston is the only U.S. city of the 86 in the league, and Sydney was the sole youth representative from North America chosen to attend this year’s conference.

The theme of the conference was “Succession of Historical Cities with Creative Revitalization.” As part of her application, Sydney submitted an abstract outlining a presentation on that topic, in relation to her home city. (Read a compressed version of Sydney’s winning presentation titled Boston: Bikes, Boats and Broadway.) She proposed creative new ways in which to view cities and attract visitors. Her main thesis was that to celebrate and share the historical and cultural landmarks of our city, we have to first bring people here.

In Nara, Sydney spent her days presenting to conference attendees from all over the world; in round-table discussion with other Youth Forum members from China, Korea and Japan; touring the area; and befriending the other students—sharing languages, stories, and pop culture favorites. During her trip she lived with a Japanese couple in their home and dined on traditional fare. Sydney’s experience was assisted by a translator and filmed by NHK (“Sort of the Japanese equivalent to CNN,” Sydney explains), which broadcast a documentary of her trip on national news.

“I really want to bring what I learned back with me. I’m working on creating a digital platform for students to share what they’re doing in their own schools with other students all over the world. The Asian students at the conference know so much about their cities’ deep, cultural history and traditions. I don’t think we, in America, know enough about our cities or where we were born and grew up. For my presentation I learned so much about Boston, and made colonial history relevant—that was a great experience. I want to help younger students get excited about this. too. I want to make learning about this cool.”

The Youth Forum first took place at the 2009 World Conference, the brainchild of Sydney’s older brother, Kyle (Milton Class of 2009). Kyle was attending the World Conference in Turkey with his father Kirk Sykes, Boston civic design commissioner, and realized there was no venue for young people to be involved in the conference and share their thoughts. He proposed the idea and plan for the Youth Forum. In its first year, it included six college students. This year, the Youth Forum included 60 high school students.

Sydney has also been involved in the LEAD Global Program in Capetown, South Africa, where she and 25 students selected from American cities joined 65 students from African nations to share a cultural and academic exchange.